The work that I create is heavily influenced by my connection to, and understanding of nature. I do pull from the aspects one might traditionally expect, flowers and leaves, the parts that are considered beautiful to most. However, I have begun to depict more unconventional images of nature, things like roots of a plant or a broken stump of a tree. These types of images have made their way into my work as a way of creating a new perspective on what nature is to us. The natural world is not always beautiful and pristine, so it should not always be represented as such. This piece, as with most of my recent work, is a representation of interdependencies within the complex relationship between the natural world and human society.

Jessie Johnson grew up in Erie, Colorado, where she began a variety of art classes at a very young age. From there, she went on to take classes in high school where she found her passion for working with clay. Now attending the University of Northern Colorado, Jessie is a Studio art Major with a chosen duel emphasis in Ceramics and Printmaking. Since her time at the University of Northern Colorado began, she has partaken in several shows including the StART Salon show in 2018, as well as an on-campus group exhibition entitled Constructs of identity. Jessie looks forward to sharing her work on more platforms and shows in the remainder of 2020 and for many years to come. 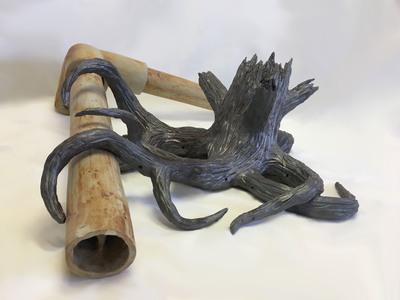