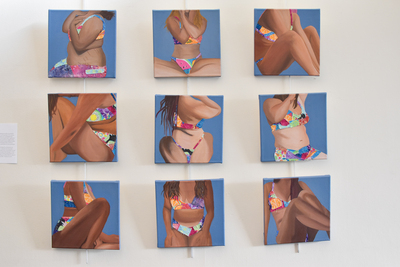 In this series, I wanted to capture the unidealized bodies of powerful women. In order to achieve my concept, I combined two 21st century artists to help create this series, Jenny Saville and Tschabalala Self. Jenny Saville, a British artist, saw beauty in the female body. I gathered nine models and had them pose in different positions to capture their natural non-photoshopped bodies. Jenny Saville paints realistic bodies and portraits that capture their flaws and Tschabalala Self, an African American artist, incorporates mixed media with fabrics in her paintings.

These two artists influenced my idea, which helped to showcase the concept. During the COVID-19 lockdown, I noticed a lot of people taking a break from social media. Coming back into a somewhat normal life, people I knew that I haven't seen in two years had changes in their appearance. With the consent from people of various body types and ethnicities, I was able to use this to help influence others that it's okay for our bodies to change and adjust throughout life. I hope you as an audience can feel the same way.

Mixed media with fabric on canvas